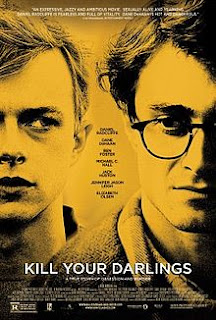 This happens every now and again with actors. One gets recognized for a certain role and they spend a majority of their career trying to escape said role. (This is apparently more common amongst actors from the United Kingdom.)

One such actor is Daniel Radcliffe, who as of late is trying to shed his image of Harry Potter. (Well, it would be hard to get away from a role you did for ten years.) In John Krokidas' Kill Your Darlings, he's as far from Hogwarts that can be allowed. Here, Radcliffe plays Allen Ginsberg during the early days of the Beat Generation. And boy, is he great in the role.

What makes Kill Your Darlings so compelling is its depiction of society back in the early 1940s. This was an era where everyone was expected to behave exactly the same. (It's fascinating to see them when their "masks" fall off.) Breaking convention was a daring thing to do back then, and these young writers weren't afraid to do that.

Radcliffe isn't the only great actor in this film. His co-stars include the likes of Dane DeHaan, Ben Foster (whom I barely even recognized), Michael C. Hall, Jack Huston, Elizabeth Olsen, David Cross, Jennifer Jason Leigh and Kyra Sedgwick. Radcliffe is clearly the star of the film, but DeHaan, Foster and Hall certainly hold their own when onscreen.

Kill Your Darlings is a really great film. There's great work from everyone involved, especially Radcliffe and Krokidas. Hopefully when a certain season rolls around, this is one film that will be remembered by then.

My Rating: *****
Posted by MovieNut14 at 8:13:00 PM
Email ThisBlogThis!Share to TwitterShare to FacebookShare to Pinterest
Labels: 2010s, movies, reviews