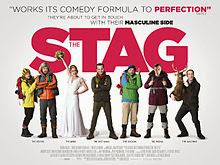 It's hard to do comedy with heart while still being funny. Most of the time it just gets soppy and stays that way. But every now and again, you stumble across one that hits the right notes.

This is what John Butler's The Stag is exactly. The premise for it is a simple one: a group of friends throw a stag party for their soon-to-be-married friend, but things don't go according to plan...

Yes, a premise like that makes it sounds like The Hangover if it was made in Ireland. (It sort of is to be honest.) But it's so much more than that. There's a certain element in the many male bonding scenes here that's lacking in other films of this nature, and it's that these scenes don't rely on lewd jokes. (Man, no wonder I like productions from across the pond. They're classier.)

I'll admit the main reason for wanting to see The Stag was because Andrew Scott (a recognizable name to anyone familiar with Sherlock) was in it. And he certainly left an impression on this viewer, though the absolute scene stealer of this film was Peter McDonald (who also co-wrote the film). Believe me, you won't forget any aspect of his performance once the credits start rolling.

Anyway, I was really surprised by The Stag. I went in expecting just a light comedy and instead got a very charming gem of a film. Be sure to seek this one out.

My Rating: ****1/2
Posted by MovieNut14 at 11:47:00 PM
Email ThisBlogThis!Share to TwitterShare to FacebookShare to Pinterest
Labels: 2010s, movies, reviews