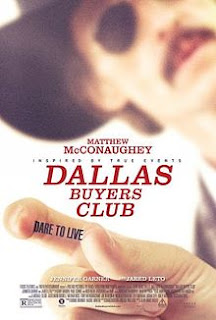 When we first see Matthew McConaughey (and, to an extent, Jared Leto later on) in Jean-Marc Vallee's Dallas Buyers Club, it comes as a shock to see what his condition is. This isn't a measly ten or fifteen pounds lost. I'm talking Christian Bale in The Machinist kind of material.

And this is before Ron Woodruff (McConaughey) finds out he has AIDS. Bear in mind this film is set during the 1980s, the height of the AIDS epidemic (and not long after Rock Hudson was diagnosed). Suffice to say that Ron (who in his first scene is having sex with two women) doesn't take his own diagnosis very well.

What makes Dallas Buyers Club so captivating is how McConaughey plays Ron. Ron is depicted initially as a man who drinks like a fish, abuses various drugs (even after his diagnosis), willing to fuck anyone with breasts, and isn't afraid to speak his mind. (Fortunately he wises up.) And yet McConaughey has us feel sorry for Ron as we watch the disease eat away at him. It's an absolutely transfixing performance from him.

Likewise with the work from Leto and Jennifer Garner. Leto is nearly unrecognizable in his role, both physically and emotionally. (Many of his later scenes are absolutely heartbreaking.) Meanwhile, Garner shows her depths as an actress, proving she's more than just the wife of an Oscar-winning director. (She also has the most perfectly timed F-strike I've heard in a long time.)

Dallas Buyers Club is, quite simply put, a brilliant film. Everything about it just flows wonderfully: the pacing, the performances, the music, everything. This is a film that won't be forgotten for a long time.