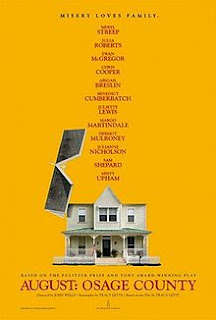 In the aftermath of a death, there are many questions and emotions swirling inside everyone close to the departed. Anger at the departed being gone, sadness over the sudden loss and fretting over what will happen now are common reactions to a passing.

This is what the Weston family feels following the death of patriarch Beverly (Sam Shepard) in John Wells' August: Osage County. In the days following his funeral, tensions and secrets boil over between the family, especially between his widow Violet (Meryl Streep) and daughter Barbara (Julia Roberts).

Being familiar with Tracy Letts' other work (Killer Joe, Bug), I was curious on whether he could do something with a domestic setting. Boy, could he ever. The dialogue itself is so many levels of uncomfortable hilarity that's practically worthy of Who's Afraid of Virginia Woolf?. (Fitting since Letts recently won a Tony for his work in Edward Albee's play.)

And with any good film (particularly an adaptation), you need the right actors. Sharing the screen alongside Streep, Roberts and Shepard are Julianne Nicholson, Margo Martindale, Chris Cooper, Abigail Breslin, Ewan McGregor, Benedict Cumberbatch, Juliette Lewis and Dermot Mulroney. Shepard, Nicholson, Martindale, Cooper and Cumberbatch gave the most lasting of the supporting performances, but this show is dominated by Streep and Roberts.

August: Osage County is a wickedly funny film interspersed with well-acted dramatic scenes. Wells, whose last film The Company Men was good but stiff in parts, certainly proves he's a director to keep an eye on. Hopefully people will be seeing and talking about this dynamic film.

My Rating: *****
Posted by MovieNut14 at 11:13:00 PM
Email ThisBlogThis!Share to TwitterShare to FacebookShare to Pinterest
Labels: 2010s, movies, reviews