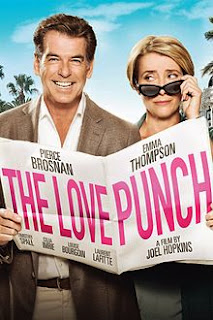 Comedy isn't usually targeted at an older audience. It's usually towards high school and college-aged people at best. It's not very often you see a comedy aimed at a much older audience.

That is what Joel Hopkins' The Love Punch is. Starring Emma Thompson and Pierce Brosnan, the film is a fun little romp for anyone looking for such a thing.

I was amused at the premise because it just sounded like all sorts of silly. But when you have charismatic actors like Thompson and Brosnan headlining it, you can't help but see it. And boy, was it worth it.

I think what also amused me was what Thompson and Brosnan's roles were like. After all, you have a serious actress doing comedy and a former James Bond being an uncool Agent 007. (Yes, the James Bond allusions throughout the film were intentional.) And it works. (I now want to see Thompson do more comedy now.)

Anyway, The Love Punch is a very charming and funny film. Thompson and Brosnan have great chemistry together as they do with co-stars Timothy Spall and Celia Imrie. If you're looking for a comedy with a balance of everything just right, then The Love Punch is for you.

My Rating: *****
Posted by MovieNut14 at 11:51:00 PM
Email ThisBlogThis!Share to TwitterShare to FacebookShare to Pinterest
Labels: 2010s, movies, reviews