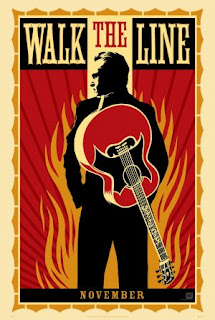 I think that the most common subject for biopics are musicians. I mean, come on. The Doors, Coal Miner's Daughter, Ray and The Runaways are good examples. Another good example is the Johnny Cash biopic Walk the Line.

Johnny Cash (Joaquin Phoenix) has gone through a very troublesome life. His brother died when he was young, he never got along with his father and he struggled to get into the music business. Once he broke through, he had to overcome drug addiction with the help of fellow singer June Carter (Reese Witherspoon).

I've been hearing a lot of backlash on Witherspoon's performance, mostly that she didn't deserve the Oscar. I somewhat agree with that statement, but honestly she wasn't that bad but she wasn't that great. Besides, I liked Phoenix's performance more. He probably would've won had Philip Seymour Hoffman and Heath Ledger weren't up for Best Actor the same year.