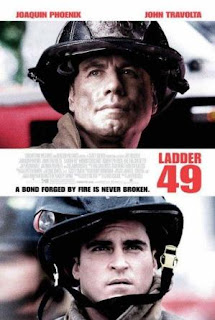 Occasionally, a movie becomes a smash hit then a few years later nobody really remembers much about it. Case in point, I'm reviewing Ladder 49.

Under the watchful eye of his mentor Captain Mike Kennedy (John Travolta), probationary firefighter Jack Morrison (Joaquin Phoenix) matures into a seasoned veteran at a Baltimore fire station. Jack has reached a crossroads, however, as the sacrifices he's made have put him in harm's way innumerable times and significantly impacted his relationship with his wife and kids. Responding to the worst blaze in his career, he becomes trapped inside a 20-story building. And as he reflects on his life, now Assistant Chief Kennedy frantically coordinates the effort to save him.

Like what I said in the introduction, Ladder 49 managed to make a large return (its budget was $20 million; made over $100 million worldwide) and a few years later it's all but forgotten. It's worth checking out, I will admit that.

My Rating: ****
Posted by MovieNut14 at 5:37:00 PM
Email ThisBlogThis!Share to TwitterShare to FacebookShare to Pinterest
Labels: 2000s, movies, reviews