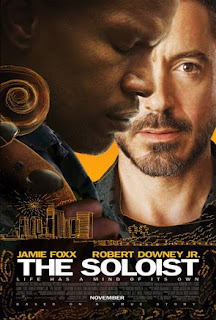 Once in a while, I go to the movies to see a movie that most people overlook rather than an overhyped big-budget blockbuster. Case in point, I'm reviewing The Soloist.

In 2005, the only thing hurting Los Angeles Times columnist Steve Lopez (Robert Downey, Jr.) more than his face from a recent bike accident was his pressing need for story ideas. That is when he discovers Nathaniel Ayers (Jamie Foxx), a mentally ill homeless street musician who possesses extraordinary talent, even through his half-broken instruments. Inspired by his story, Lopez writes an acclaimed series of articles about Ayers and attempts to do more to help both him and the rest of the underclass of LA have a better life. However, Lopez's good intentions run headlong in the hard realities of the strength of Ayers' personal demons and the larger social injustices facing the homeless. Regardless, Lopez and Ayers must find a way to conquer their deepest anxieties and frustrations to hope for a brighter future for both of them.

Both Downey and Foxx deliver strong performances, but the movie itself lags throughout. You would think Joe Wright would direct a strong movie judging from his earlier efforts (Pride and Prejudice and Atonement), but alas he does not.