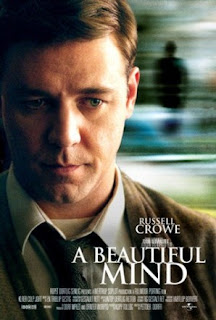 In my opinion, biopics are shoo-ins for Oscars. I mean, just look at the number of Oscar-nominated performances that are actual people. Anyway, before I get sidetracked, onto the review.

John Nash (Russell Crowe) goes through a myraid of highs and lows from his time as a mathematics student in graduate school at Princeton in the late 1940's to his Nobel Prize win for Economics in 1994. A brilliant but somewhat arrogant and antisocial man, Nash preferred to spend his time with his thoughts than with people. Two people he did make a connection with were Charles Herman (Paul Bettany), his roommate at Princeton, and Alicia Larde (Jennifer Connelly), one of his students when he was teaching at MIT in the early 1950's. He and Alicia eventually marry. As time goes on, Nash lives more and more within himself which causes major problems in his life.

The performances were good, and that's all I have to say. Connelly was good, but not Oscar-worthy good. Crowe was better and more Oscar-worthy. The movie itself I can sum up in one word: modest.