BOOK VS MOVIE: One Flew Over the Cuckoo's Nest 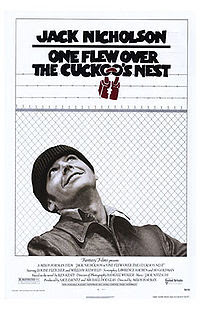 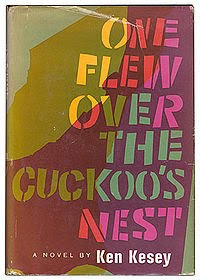 You know how some authors completely detest the film adaptations of their novels? The most notable example is Stephen King voicing his (ahem) "opinion" on Stanley Kubrick's take of The Shining. Rewind five years earlier, Ken Kesey was upset over how One Flew Over the Cuckoo's Nest, his debut novel, was being treated as a movie.

Life at an Oregon mental institution is normal and under control. That is, until Randale Patrick McMurphy shows up. He enlivens the patients, throws the institution into chaos and turmoil, and tests the patience of Nurse Ratched.

Mental illness is a touchy subject in the media, but it definitely works in both the book and movie. The book is a stellar piece of literature, while the movie is a fine film. The performances are great as well.
What's worth checking out?: I'd go with both.
Posted by MovieNut14 at 4:01:00 PM
Email ThisBlogThis!Share to TwitterShare to FacebookShare to Pinterest
Labels: book vs. movie, director: Miloš Forman, reviews