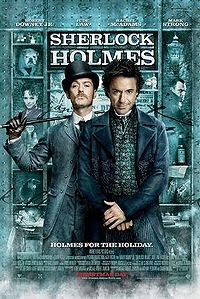 (sigh) Robert Downey, Jr.. So hot and talented, a rarity in Hollywood. Anyway, back to the review.

In 1891 London, Sherlock Holmes (Downey) and Dr. John Watson (Jude Law) stop an attempted ritual murder by Lord Blackwood (Mark Strong), who has killed five other people in a similar manner. Blackwood is hanged, but not before telling Holmes about three impending deaths. Days later, news starts to circulate that Blackwood has risen from the grave, which leads to a investigation by Holmes and Watson.

You know how some directors have a certain style of filmmaking that makes them recognizable? Well, that's true in the case of Guy Ritchie. You can tell that this is his movie just from the trailer. I particularly love the score by Hans Zimmer. It has the sophisticated tone of a period piece mixed with the kick-ass tone found in an action movie. As for Downey and Law, I wouldn't mind to see them act alongside each other for another movie.

My Rating: ****
Posted by MovieNut14 at 9:48:00 AM
Email ThisBlogThis!Share to TwitterShare to FacebookShare to Pinterest
Labels: 2000s, movies, reviews