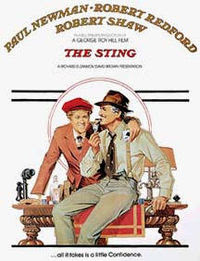 Some actor pairings manage to stand the test of time for their longevity (ie, Katharine Hepburn and Spencer Tracy). In the case of Paul Newman and Robert Redford's two-film collaboration, it's just as great.

Small time grifter Johnny Hooker (Redford) unknowingly steals from big time crime boss Doyle Lonnegan (Robert Shaw) when he pulls a standard street con. Lonnegan demands satisfaction for the insult. After his partner Luther Coleman (Robert Earl Jones) is killed, Hoker flees and seeks the help of Henry Gondorff (Newman), one of Luther's contacts and a master of the long con. Hooker wants to use Gondorff's expertise to take Lonnegan for an enourmous sum of money to even the score, since he admits he "doesn't know enough about killing to kill him". They devise a complicated scheme and amass a talented group of other con artists who want their share of reparations. The stakes are high in this game and our heroes must not only deal with Lonnegan's murderous tendencies, but also other side players who want a piece of the action. To win, Hooker and Gondorff will need all of their skills...and a fair amount of confidence.

In some ways, The Sting reminded me of Butch Cassidy and the Sundance Kid not for the same lead actors (and director) but for the comedic antics woven into the plot of committing the perfect crime. You really have to pay attention to the movie; there are so many twists and turns throughout that if you lose focus, you might not understand what is going on.