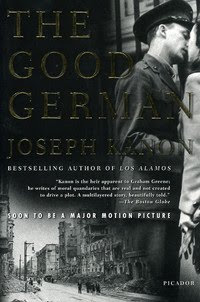 One of the more common settings for a book or movie is World War II. Why that is I don't know, but it makes for good entertainment.

Nearing the end of World War II, news correspondent Jake Geismar is sent to Germany to cover the Potsdam Conference. His main goal is to find Lena, the mistress he left behind at the outbreak of the war. Along with finding Lena, Jake becomes enthralled in solving the murder of an American soldier.

I thought that The Good German was a good book, but it's rather wordy. I would recommemd it to anyone who enjoys mystery novels and doesn't mind long books.

My Rating: ****
Posted by MovieNut14 at 3:26:00 PM
Email ThisBlogThis!Share to TwitterShare to FacebookShare to Pinterest
Labels: books, reviews