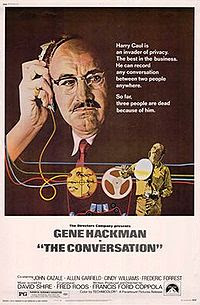 When the name of Francis Ford Coppola is brought up, the two movies most people associate with him are The Godfather and Apocalypse Now. Which is kind of sad since more people know him by those two and not acknowledge the rest of his filmography.

Harry Caul (Gene Hackman) is a surveillance expert who's a tad paranoid. He never tells anyone, not even those working in the same field, what he does. When the couple he's monitoring mentions murder in their conversation, his paranoia increases.

I assume not many people are aware of this Coppola gem since it was made between The Godfather and its sequel. But disregarding that fact, don't overlook this. It's a very brilliant thriller.