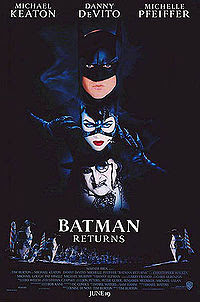 It's really rare to see a sequel to do as well or better than the original critically in the case of mainstream movies (Aliens, The Dark Knight). If you're wondering where Batman Returns falls into, it's not there.

A deformed baby boy is thrown into Gotham City's river by his horrified parents (Paul Reubens and Diane Salinger). Thirty-three years later, the child is transformed as the Penguin (Danny DeVito), whose gang of freaks disrupts the ceremonial lighting of Gotham's Christmas tree and kidnaps millionaire industrialist Max Shreck (Christopher Walken). Armed with evidence of Shreck's many crimes, the Penguin blackmails him into finding the true identity of his parents. When the Penguin's plight becomes news, he's propelled into running for mayor. Batman (Michael Keaton), however, is unconvinced by the Penguin. Meanwhile, Selina Kyle (Michelle Pfeiffer), Shreck's secretary, discovers a plan created by Shreck to drain Gotham of its power. Because of that, she's thrown fromt he top of the building by Shreck. She's revived by alley cats and returns home. After a bit of needlework, she is now Catwoman.

Much like what I said for the first one, the only problem I had with the movie was that it focused too much on the supporting characters. But if you just want a simple superhero movie to watch on a lazy afternoon, here's your movie.