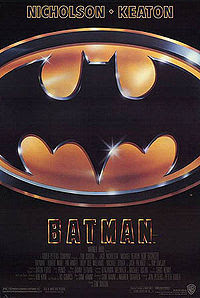 I have seen four of the six (seven if you count that one from the 1960's) Batman movies, all of which dircted by either Tim Burton or Christopher Nolan.

The town of Gotham City is under control by crime boss Carl Grissom (Jack Palance). Despite the best efforts of district attorney Harvey Dent (Billy Dee Williams) and police commissioner James Gordon (Pat Hingle), the city's police department is still corrupt. Meanwhile, photojournalist Vicki Vale (Kim Basinger) and reporter Alexander Knox (Robert Wuhl) begin to investigate the rumors of a vigilante dressed as a bat, who's been frightening criminals throughout the city. They attend a benefit held at the mansion of billionaire Bruce Wayne (Michael Keaton), who's amused by Vicki's charm. That same evening, Grissom's second in command Jack Napier (Jack Nicholson) is sent to raid the Axis Chemicals factory, but he realizes he was set up by Grissom, who was angered by the affair Napier had with his mistress, after the police arrive. Batman arrives at the factory in the midst of a shootout. Napier falls into a vat of unknown chemicals and, after a botched surgical attempt, becomes "the Joker".

I like the dark, edgy feel to the movie, but the only problem I had with it was that the supporting roles got more attention than the lead. Forget what the naysayers said, Keaton was good as Batman. Nicholson was also good, but after seeing Heath Ledger in The Dark Knight, he was modest at best.