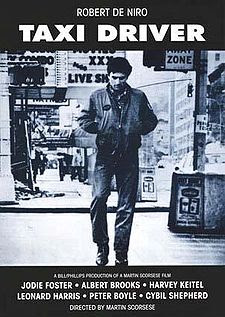 I managed to have seen three of Martin Scorsese's best-known (and violent) movies just this year. Those three being Raging Bull, Goodfellas and Taxi Driver, the latter I will be reviewing.

Vietnam vet Travis Bickle (Robert De Niro) is a loner in the mean streets of New York City, slipping slowly into isolation and violent misanthropy. In solving his insomnia by driving a taxi cab on the night shift, he grows increasingly disgusted by the low-lifes that hang out at night: "Someday a real rain will come and wash all the scum off the streets." His touching attempts to woo Betsy (Cybill Shepherd), a Senator's campaign worker, turns sour when he takes her to a porn movie on their first date. He even fails in his attempt to persuade child prostitute Iris (Jodie Foster) to desert her pimp Matthew (Harvey Keitel) and return to her parents and school. Driven to the edge by powerlessness, he buys four handguns and sets out to assassinate the Senator, heading for the infamy of a 'lone crazed gunman'...

Although I really liked Taxi Driver, it's not my favorite Scorsese movie (that honor goes to Goodfellas). De Niro's performance of Travis Bickle ranks up there with his performance of Jake LaMotta in Raging Bull. Scorsese manages to build up the anguish Travis is feeling masterfully. But honestly, who's to judge a famed collaboration like Scorsese and De Niro?