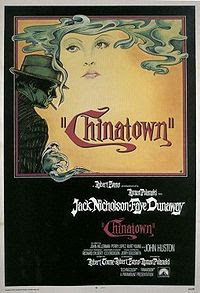 Boy, 1974 was a helluva year for movies. I mean, Francis Ford Coppola had The Godfather Part II and The Conversation, Sidney Lumet had Murder on the Orient Express, Mel Brooks had Blazing Saddles and Young Frankenstein, Martin Scorsese had Alice Doesn't Live Here Anymore, Bob Fosse had Lenny, and Roman Polanski had Chinatown, the latter I'll be reviewing.

Jake "J.J." Gittes (Jack Nicholson) is a private detective who seems to specialize in matrimonial cases. He is hired by Evelyn Mulwray when she suspects that her husband Hollis (Darrell Zwerling), builder of the city's water supply system, of having an affair. Gittes does what he does best and photographs him with a young girl but in the ensuing scandal, it seems he was hired by an impersonator (Diane Ladd) and not the real Mrs. Mulwray (Faye Dunaway). When Mr. Mulwray is found dead, Jake is plunged into a complex web of deceit involving murder, incest and municipal corruption all related to the city's water supply.

Having seen Rosemary's Baby before Chinatown, I knew that Roman Polanski was an expert on creating suspense. Nicholson delivers one of his best performances, while Dunaway executes the perfect femme fatale. Robert Towne's screenplay has many twists and turns that'll keep you on edge until the very end.