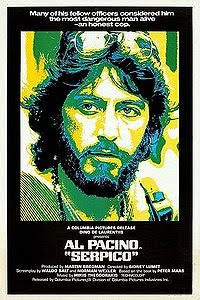 
Frank Serpico (Al Pacino) is an undercover police officer who starts to grow suspicious of the honesty of his division. His investigation has him embarking into dangerous territory and his fellow officers turning on him.


Lumet definitely knows how to direct a thrilling movie (other examples include Dog Day Afternoon and 12 Angry Men). And Serpico is beyond thrilling. It's gritty. It's powerful. It's real. Pacino gives one of his best performances. He probaby would've won too.