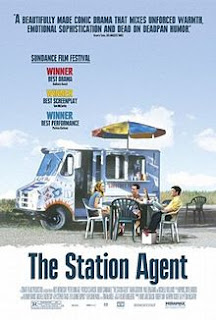 Not long into Thomas McCarthy's The Station Agent does the story begin. Fin (Peter Dinklage) inherits a train depot from a friend of his. He tries to keep himself distant from those around him, but that doesn't stop Joe (Bobby Cannavale) and Olivia (Patricia Clarkson) from trying.

The Station Agent is certainly far from other films from the year. (I mean, it was released the same year as Mystic River and 21 Grams.) It's not an emotionally driven film but there are dramatic moments in it. It has its fair share of both comedy and drama though.

Usually many films tend to stray away from the emotional bonds that the characters make throughout the film. (Physical bonds, however...) The Station Agent is one such film that focuses on such bonds. (Granted, that's expected for an indie film, but still.)

Amongst the work from the three primary actors, they each provide substantial work. Dinklage shows both resistance and acceptance towards emotions. Cannavale provides most of the film's comic relief. Which brings me to Clarkson, the best thing about The Station Agent. She's worrisome without getting to Woody Allen levels and self-destructive without the melodrama. (There's also some good early work from Michelle Williams.)

Anyway, The Station Agent is an all right film. Nothing particularly special about it but it's still an amusing film. It also got me curious about McCarthy's other films.

My Rating: ****
Posted by MovieNut14 at 7:35:00 PM
Email ThisBlogThis!Share to TwitterShare to FacebookShare to Pinterest
Labels: 2000s, movies, reviews