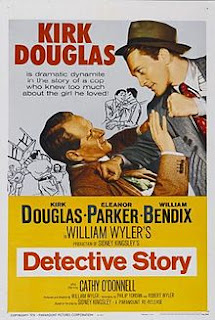 Every now and again, those films from Hollywood's Golden Age that are usually forgotten tend to get their moment in the spotlight. (more than often thanks to a screening on TCM.) Sometimes they're not that great but often times you find a real gem.

Such in the case with William Wyler's Detective Story. It's easy to see how it got lost amid other releases. After all, it got released the same year as A Streetcar Named Desire, An American in Paris,  Strangers on a Train, The African Queen and A Place in the Sun. (Also released that year was Ace in the Hole, which also featured Kirk Douglas, the star of Detective Story.)

Anyway, the film revolves around a day in a police precinct where criminals get booked. Among the officers is Det. Jim McLeod (Douglas), who has an absolute hatred for crime. Then something from his wife's past is revealed and everything just spirals out of control.

Usually with crime-oriented films, you can be promised some solid work from its actors. In the case of Detective Story, it's from Douglas, Eleanor Parker (as McLeod's wife) and Lee Grant (as a shoplifter), the latter two earning Oscar nominations (though I feel for the wrong categories). Both Parker and Grant hold their own, but this show belongs to Douglas.

Detective Story in toll is a really good film. It's not as great as Douglas' other 1951 film Ace in the Hole, but it certainly has its moments. If you can get a hold of it, it's well worth your time.