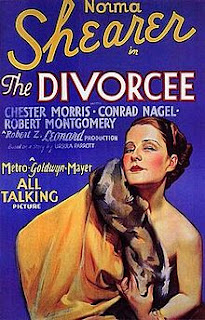 Many films made in the early 1930s (well, up to 1934) were skimming dangerous territory. Sex, murder, drinking (this was during prohibition after all), nudity...everything found in every R-rated movie today was shocking the censors over eighty years ago.

One such film from the time period was Robert Z. Leonard's The Divorcee. The premise sounds vaguely similar to any film that tries (and fails) to get the same impact: a woman gets her sexual revenge after her husband admits to cheating on her. Nowadays it sounds like the same old song but back in 1930, this was pretty scandalous stuff.

Especially for Norma Shearer, the film's star. No one, not even MGM executive/Shearer's husband Irving Thalberg, thought she was right for the provocative role. (They were considering Joan Crawford for the part.) No one could see the actress known for playing dignified ladies taking on the role of a bad girl.

But she shocked everyone by proving she could in fact play such a role. Shearer shows her character's hurt nature when her husband admits his infidelity while also keeping up a carefree attitude when she's with one of her numerous lovers. No surprise on how she won the Oscar that year.

Shearer's performance aside, there's not much else about The Divorcee to write home about. It treads into expected territory and the other actors don't have particularly much to do. Still, it's an amusing watch.

My Rating: ****
Posted by MovieNut14 at 11:29:00 PM
Email ThisBlogThis!Share to TwitterShare to FacebookShare to Pinterest
Labels: 1930s, movies, reviews