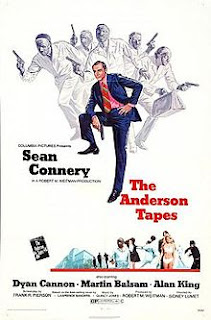 With many crime films, it all focuses on committing the perfect crime. It all relies on planning a plot so woven that the police wouldn't know what hit them. But what if someone knew of the supposedly elaborate scheme?

That is what Sidney Lumet's The Anderson Tapes explores. Following his release from prison, a criminal conspires to commit a massive robbery of his girlfriend's apartment building. But unbeknownst to him, there are mysterious agencies recording his every word. For what reason though?

This is one of the lesser entries among the work of Lumet and star Sean Connery though it is an amusing one. (The film was responsible for kickstarting Connery's career post-James Bond.) Another notable feat from this film? It introduced Hollywood to Christopher Walken.

The most notable sequence of The Anderson Tapes is the denouement. Interwoven with the actual crime and the aftermath of it, the sequence shows an agility that the would-be robbers in Lumet's (much) later work Before the Devil Knows You're Dead wish they had. (You thought I was going to say Dog Day Afternoon, weren't you?)

The Anderson Tapes is an all right film with some standout moments. It looks pale in comparison to Lumet's other films from the 1970s but again it has its moments. All in all, it's worth a look at least.