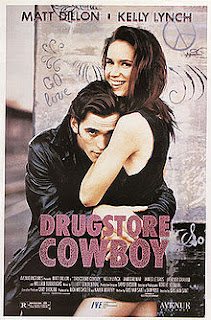 Addiction is fucking relentless, isn't it? What started as a casual thing turns into something you need or you'll just die. (Or at least feel like you will.)

Watching Gus Van Sant's Drugstore Cowboy, it certainly comes across that way with Bob Hughes (Matt Dillon). He has his wife Dianne (Kelly Lynch) and associates Rick (James LeGros) and Nadine (Heather Graham) help him steal pharmacies for his (and their) addiction. But it soon dawns on Bob that he should kick this habit and soon.

Some may view Drugstore Cowboy as simply a film about drug addiction. It could be viewed as an outlaw film in a similar vein to Badlands. The four leads are constantly on the run from the police because of their frequent robberies. They didn't want to live a life like this, but their addictions sealed their fates.

Like Van Sant's later film My Own Private Idaho, Drugstore Cowboy revolves around situated in Portland, Oregon. Thanks to the eye of cinematographer Robert Yeoman, the film depicts the city as a place where hopes and dreams die agonizing deaths. (The way Portland looks throughout drives that point home.)

Drugstore Cowboy isn't my favorite of the Van Sant films I've seen (that honor goes to either To Die For or Milk), but I did like it very much. Thanks to the lead work from Dillon, the film isn't just the typical "drugs are bad" spiel. It's willing to show how damn addictive those drugs are.