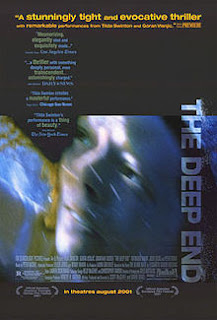 Early on in Scott McGehee and David Siegel's The Deep End, it's established that the recent life of Margaret Hall (Tilda Swinton) is a complicated one. Her son Beau (Jonathan Tucker) is seeing nightclub owner Darby Reese (Josh Lucas) against her wishes. It doesn't take long before the situation goes from bad to worse.

How so? Darby turns up dead on the Halls' property, Margaret ends up hiding evidence that he was even there (including his body) and blackmailers show up with incriminating proof of the extent of Beau and Darby's relationship. Oh, what's a mother to do?

Now a brief summary like that sounds somewhat rubbish, but what McGehee and Siegel do with The Deep End is fascinating to watch. They take the usually tired cliches of thrillers and give them new variations on them. However, they do tend to slip into a few cliches every now and again.

Swinton, as with many of her other roles, is great here. As Margaret, she shows an uneasy nature while keeping a calm facade. Much like her later work in We Need to Talk About Kevin, Swinton handles the worst with complete dignity.

The Deep End falters a few times but overall it's a solid film. McGehee and Siegel, as stated above, make a film that tries to veer away from the cliches. It doesn't work entirely but thanks to Swinton's performance, the film certainly stands out as an underappreciated title of the last decade.

My Rating: ****
Posted by MovieNut14 at 11:47:00 PM
Email ThisBlogThis!Share to TwitterShare to FacebookShare to Pinterest
Labels: 2000s, movies, reviews