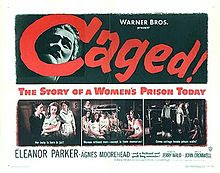 When we first see Marie Allen (Eleanor Parker) in John Cromwell's Caged, she looks absolutely terrified. For good reason too; she's about to go to prison for participating in a robbery.

Of course, when you see those doe-like eyes of Marie's, you know she simply doesn't belong there. You also have a notion that the guards and the other prisoners are going to make her life behind bars a living hell for Marie. And it certainly looks like that at first.

But then something happens to Marie; she starts to crack. Not just under pressure from the other prisoners but also her innocence begins to crumble. As the films wears on, her good girl demeanor fades as a nastier attitude takes its place. This is something you normally don't see in most prison films from the time.

And Parker makes this transition all the more transfixing. Seeing her soft, innocent features take on a hardened, cynical nature is just hypnotizing. One can only imagine what would have happened with Parker and her career had she won the Oscar for this. (But when you're up against the likes of Bette Davis, Anne Baxter and Gloria Swanson, it's clear that the competition will be tough.)

Caged in itself is a pretty good prison film which seems tame by today's standards. In comparison to other prison films of the time like Brute Force, Caged seems both equal to them and softer than them. All in all, if you want to see a solid underrated performance, then you'll find it in the form of Eleanor Parker in Caged.