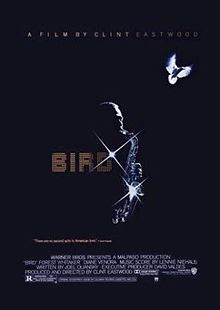 The great innovators of varying cultures are more than often tortured souls. Authors, actors, artists, musicians...they become prone to addiction and self-destruction. Is it because fame becomes too much for them? Is it their own personal demons? What causes them to crack?

Clint Eastwood's Bird chronicles the rise and fall of jazz saxophonist Charlie "Bird" Parker (Forest Whitaker). Like many musicians before and after him, Parker rose to the top fast and crashed even faster. Drug addiction, a troubled personal life and changing times are what resulted in the decline of Charlie Parker.

I think what surprised me the most about Bird was who directed it. This was made by a man who got immortalized for playing cowboys and other tough guys. It struck me as different to see Eastwood make a film about a man slowly getting destroyed. (And I do mean slowly.) It's great stuff.

Likewise, I wasn't sure what to expect from Whitaker. I was only really familiar with him from his Oscar-winning role in The Last King of Scotland. After seeing his work in Bird, I now know that he can act. The vast difference between his roles in this and The Last King of Scotland is simply staggering. How he didn't get an Oscar nomination for Bird is beyond me.

It's slow in some spots but Bird is a great film. Thanks to solid work from Whitaker and Diane Venora (she plays Parker's worn out wife), the film stands out as a very underappreciated work. (Eastwood should do more films like this.) If you haven't seen it, you should.