The Last of Sheila 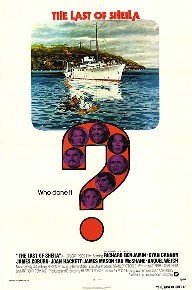 What convinces you to see a film? The actors? The director? The plot? Whatever the reason, there will always be something in a film that'll make you want to see it.

In regards with Herbert Ross' The Last of Sheila, it wasn't who was in it or what it was about that intrigued me. (Though they did have some part in my interest.) No, what got me curious about The Last of Sheila was who wrote it. The men responsible for the script? Anthony Perkins and Stephen Sondheim, the last people you'd expect to write a whodunnit. Yet it works (for the most part).

The actors chosen are an amusing sort. Among the cast are James Coburn, Dyan Cannon, Richard Benjamin, Raquel Welch, James Mason and Joan Hackett. (There's even a young Ian McShane amongst them.) It's the difference in their personalities that makes the film vibrant.

As with other star-studded features from the era, The Last of Sheila follows an adventurous plot. Well, actually, it tries to. It falters periodically but it stays mostly solid throughout. (That's more that can be said about those other films.)

Anyway, The Last of Sheila is an all right film. Not particularly great, but it does keep your attention. So all in all, if you want an amusing romp of a film, then you've got it in the form of The Last of Sheila.