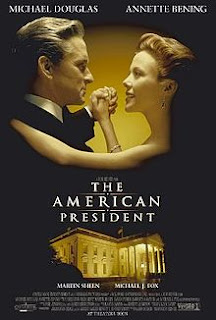 Finding a solid romance film nowadays is sort of rare. Most films of the genre just rely on sex. No emotions, no passion, nothing. Just sex.

It's amusing when you realize that Aaron Sorkin wrote The American President. I mean, most of the man's works have very tangled up relationships. (Try to find one of his shows that doesn't have one such affair.) Seeing a simple relationship from Sorkin's mind is refreshing to witness.

Also amusing is how many parallels there are between this and Sorkin's later work The West Wing. (The most telling one is both have Martin Sheen among their casts.) Many ideas originally written for this would instead go on the TV show. It's a small thing, yes, but it's something I admire.

The American President is a very lovely film. Some of Sorkin's writing traits rubbed me the wrong way in a few scenes, but the final result left me pleased. The scenes between Douglas and Bening show what most films of the genre miss completely: a mature depiction of a budding romance.