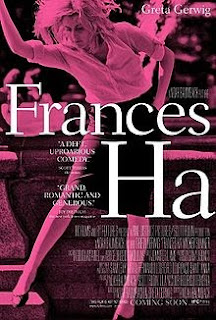 As some of you may know, life after college isn't particularly easy. Employment, rent, taxes, relationships...it can be pretty daunting. (I don't know this from my own experiences but I sense my sister will be encountering such occurrences in the near future.)

Now many films on this very topic usually overplay the personal dramas one encounters. Just because your life isn't in order doesn't mean it absolutely terrible. Graciously, Noah Baumbach stays very much away from that cliche with his new film Frances Ha. Starring Greta Gerwig (who also co-wrote it), the films shows that even if life isn't great, there can be a few bright spots.

It's interesting. The last (and, I'll admit, only other) Baumbach film I saw was The Squid and the Whale where very few -- no, scratch that -- none of the main characters were likable. (And from what I heard, that's common amongst Baumbach's work.) The reverse is one of Frances Ha's best qualities. You like Frances from beginning to end.

And it's Gerwig's performance that is to thank. It's subtle yet expressive, quiet but observant. I can sense that Gerwig will be working for some time thanks in part to this film, but I also hope that this is a performance remembered by the awards circuit.

Frances Ha is a really charming film. It has what so many films are so clearly missing: a heart. (Ironic since, as pointed out above, Baumbach's films often feature heartless characters.) If it's playing at a theatre near you, go see it.

My Rating: *****
Posted by MovieNut14 at 11:47:00 AM
Email ThisBlogThis!Share to TwitterShare to FacebookShare to Pinterest
Labels: 2010s, director: Noah Baumbach, movies, reviews