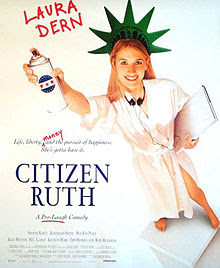 It's made quite early on in Alexander Payne's Citizen Ruth that Ruth Stoops (Laura Dern) is a very screwed up person. Everyone knows that her constant fume sniffing isn't exactly making her life any better. (Even the police are fed up with her.)

When Ruth finds out she's pregnant (again), her initial reaction is that of annoyance. And after getting sentenced (again), the judge asks -- no, begs -- for her to "take care of the problem". Enter pro-lifers and pro-choicers into the whole situation, and who knows what'll happen?

The subject of abortion has always been a touchy one. (It annoys me that this is a subject still being debated.) With his directorial debut, Payne isn't afraid to show how overblown and ridiculous these debates have become. (Somewhat unsettling that this is still relevant seventeen years later.)

The very thing that keeps Citizen Ruth vibrant and biting from beginning to end is Dern in all of her twitchy glory. Whether she's crying over how miserable her life is, spewing profanities or trying to grasp the predicament she's in, Dern elicits sympathy for Ruth even though she's not exactly that great of a person. (Ruth, that is.)

Knowing its director, it certainly comes as no surprise that Citizen Ruth is wickedly funny. (Emphasis on "wicked".) Thanks to Dern's performance (which really should have earned some awards recognition), the film is willing to make fun of a controversial subject without making it crass. If you want a smart comedy, you'll find it in the form of Citizen Ruth.