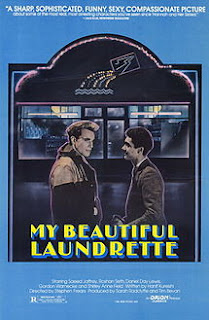 Many films from the 1980s are either completely ridiculous action movies, horror movies that rely more on T & A than scares, and "dramas" whose main selling point was sex (and a lot of it). Thankfully, there were a number of films from the decade that were at least tasteful.

One such film was Stephen Frears' My Beautiful Laundrette. Set in London during Thatcher's reign, the film revolves around two men: hopeful Pakistani businessman Omar (Gordon Warnecke) and British punk Johnny (Daniel Day-Lewis). Both men are on different ends of the social spectrum, but that doesn't stop them from having an intimate relationship.

The way Frears shows Omar and Johnny's relationship is really beautiful. It's not an affair built on lust but rather desire. They never say "I love you" to each other but their body language says it for them. It's the subtlety of their relationship that I adore.

Along with the relationship, the film also handles a multitude of topics such as racism, the differences in social classes and sexual politics. Any other film would have been bogged down in these subjects but Frears knows how to limit himself. Another aspect of this film that I adore.

Anyway, My Beautiful Laundrette is a very lovely film. I'm all for romance films where the lovers speak volumes with body language than with verbal language and as stated above, this film depicts such an occurrence beautifully.