Born to Be Blue 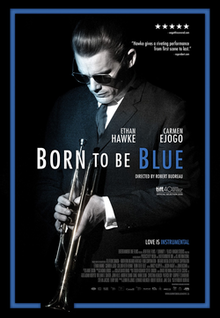 If there's one thing that various names of the music industry have shown the masses, it's that being a musician isn't as cracked up as it appears. It's very rare to find a musician both past and present that didn't have a history of substance abuse, and more often than not it affects their talent. (At least a few of them wrote songs about it once they've cleaned up.)

Granted it was more prevalent before drug laws became more strict throughout the world, and many times it was with musicians now hailed as the greatest to ever perform. Such is the case with Chet Baker, the subject of Robert Budreau's Born to Be Blue. Baker was one of the biggest names in jazz but like his musical contemporaries, he couldn't resist the vices that came with fame.

Being part fictional/part factual, Born to be Blue focuses on Baker (Ethan Hawke) as he tries to go straight. With the help of girlfriend Jane Azuka (a composite of several women in Baker's life played by Carmen Ejogo), he tries to maintain steady work as well as staying clean. But will Baker give into temptation?

Born to Be Blue admittedly follows the familiar formula for biopics though Budreau does coax out some solid work from Hawke. The actor, who's had his fair share of hits and misses over the years, shows the strength in his abilities. Hopefully awards voters will remember it by year's end.

All in all however, Born to Be Blue is average at best. It does try its best to achieve the same ranks as Walk the Line but it falls short. Still, Hawke's performance makes up for it in the long run.

My Rating: ****
Posted by MovieNut14 at 2:03:00 PM
Email ThisBlogThis!Share to TwitterShare to FacebookShare to Pinterest
Labels: 2010s, movies, reviews