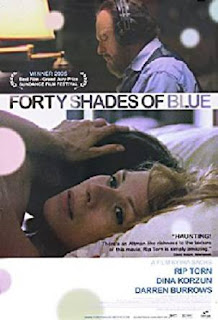 Sometimes queer directors tend to capture the woes of everyday life better than their straight counterparts. Christopher Isherwood wrote about human behavior more intimately than, say, Ernest Hemingway. Andrew Haigh captured the tumultuous nature of marriage in 45 Years as well as John Cassavetes did in Faces. And those are just a few examples.

Ira Sachs' Forty Shades of Blue also focuses on the stormy stages of a relationship, this one of a May-December variety. One half (Rip Torn) is persistently unfaithful while the other half (Dina Korzun) isn't happy with the state of their relationship. But soon something happens that alters the delicate balance of this union.

Forty Shades of Blue admittedly follows a familiar formula: strained relationship, third person enters the picture, complications ensue. It's an overused trope by this point but if it's in the right hands, it might result in something original. Alas, that's not the case here.

Sachs does provide a perspective that can equate to an outsider looking in. He depicts a relationship quite simply beyond repair, faint glimmers of hope sprinkled here and there. But all in all, Sachs shows there's no chance for these two.

Forty Shades of Blue by many means is an average film though Sachs does try his best. But unlike his later film Love Is Strange, Sachs depicts a doomed affair. At least the work from Torn and Korzun is solid enough.