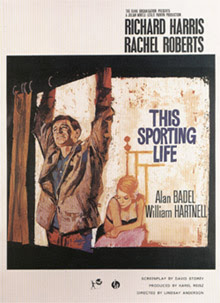 The late 50s and early 60s saw the emergence of the British New Wave. It depicted kitchen sink drama, another name for the plights the working-class protagonist encountered. By now it's a movement that has run its course but sometimes it makes its presence known in more recent titles.

One title from the movement's peak was Lindsay Anderson's This Sporting Life. Like earlier films of the British New Wave such as Saturday Night and Sunday Morning and Room at the Top, it depicts a man who's unsatisfied with his current life and finds brief solace in a woman. But that only adds to his problems.

This Sporting Life was Anderson's first feature-film debut after making several documentary shorts. Here, he channels the era's long-simmering anger in the form of Frank Machin (Richard Harris). But this detail also shows the film's age.

Onto Harris' performance. Nowadays he's known for playing Dumbledore in the first two Harry Potter movies before Michael Gambon took over. But his work in This Sporting Life decades before shows his abilities as an actor. His Frank can be crass in one moment then considerate in the next. (The film's penultimate scene is a particularly harrowing piece of acting from Harris.)

This Sporting Life may not measure up to other British New Wave titles to some but it does have its moments. The work from Harris and Rachel Roberts is good but again certain elements show the film's age. At least Anderson depicted Britain's anger better five years later.