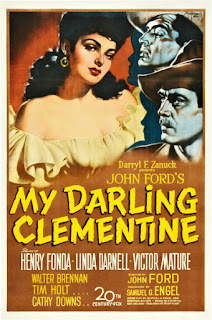 John Ford is the undisputed great when it comes to westerns. His collaborations with John Wayne are the ones that have stood the test of time. Sure, there have been the likes of Sergio Leone and Clint Eastwood in the years to come, but Ford is frequently the first name that comes to mind when westerns are concerned.

My Darling Clementine sometimes isn't held in the same regard as Stagecoach or The Searchers. (Probably because it doesn't star Wayne.) Perhaps it's because the film's easily the most human of the entire western genre, a trait seldom applied to others.

Being the first post-war production for both Ford and star Henry Fonda, My Darling Clementine also displays a sense of maturity frequently found in works from this time in Hollywood. Both established and emerging names were coming home from the war, and they wanted the movies they worked on to be real.

My Darling Clementine doesn't rely on the violence so much as other westerns did in the years to come. Instead, Ford focuses more on the myth of the Wild West as it slowly builds up to the infamous gunfight at the O.K. Corral. (That's a detail you can only find in a Ford film.)

It doesn't take much to see that My Darling Clementine is another of Ford's many great films. Gorgeously shot by Joseph MacDonald, it's the kind of picture you need to see at least once in your lifetime.