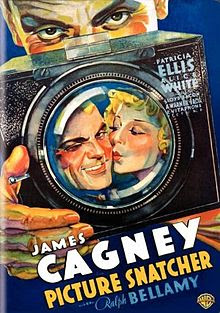 Lloyd Bacon's Picture Snatcher opens with Danny Kean (James Cagney) getting released from prison after a three-year stint. But upon getting that whiff of freedom, he decides to go straight. He gets a job at a tabloid and quickly makes a name for himself as a photographer.

This being a title made in the pre-Code era, one of the plot points of Picture Snatcher  involves Danny taking a picture of an execution the moment the switch is thrown. This is a reference to an event just five years prior. As Ruth Snyder was strapped into the electric chair, Tom Howard prepped the hidden camera on his person for the second electricity started coursing through her body. The result was perhaps one of the most sensational photographs taken.

Back to Picture Snatcher. It was made between 42nd Street and Footlight Parade (also starring Cagney), two of Bacon's more well-known films. Is it because of this detail that made Picture Snatcher somewhat forgotten? Perhaps though considering its star, it's hard to see why that is.

The reason? Why, it's Cagney, that's why. This is a performer that very rarely doesn't deliver when it comes to his work. Whether it's a leading role from the height of his career or something towards the end of it, he knew how to entertain his audiences.

Picture Snatcher is certainly one of the more entertaining titles of Cagney's extensive career. (Surely he must've had some fun making this.) It may have gotten lost in the shadows of his more famous films but that doesn't mean it should be entirely ignored.