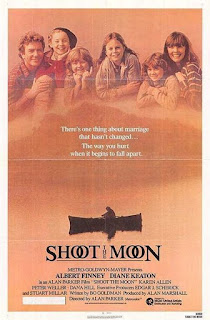 When we first see George Dunlap (Albert Finney) in Alan Parker's Shoot the Moon, it's clear that he's overwhelmed by domestic life. He soon gets on the phone with his mistress Sandy (Karen Allen), and he admits to her that he can't stand being without her. And shortly after that, we find out that his marriage to Faith (Diane Keaton) is deeply fractured.

What follows in Shoot the Moon is George and Faith trying to cope in the aftermath of his actions. In a vein similar to Kramer vs. Kramer, Parker captures the struggles of raising a family during a time of separation. But how will this formerly tight-knit family handle the changes?

By this point in their careers, Finney and Keaton were well-established in Hollywood (he had two Oscar nominations under his belt, and she had won one and had another nomination). With Shoot the Moon, both actors continue to show why they quickly became desirable performers early on in their careers. (Now if only someone would give Keaton another meaty role...)

Shoot the Moon doesn't just focus on George and Faith adjusting to the changes in their lives. Their daughters, particularly Sherry (Dana Hill), feel resentment towards George for breaking up their family. But what will be the final fate of the Dunlaps?

Shoot the Moon is a very mature depiction of the collapse of a marriage and its aftermath. The work from Finney and Keaton proves that it's a film that should be sought out more. (And seriously, Keaton needs to do another solid drama.)