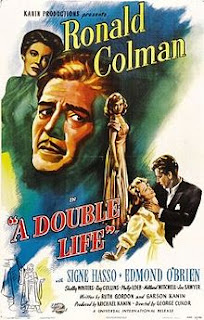 Actors tend to make for fascinating subjects in fiction. Their fears, their insecurities, all of those are on display for their unseen audience. What flaws of their do they keep hidden from the public eye?

George Cukor's A Double Life follows Anthony John (Ronald Colman) as he prepares for his next production: Othello. He earns rave reviews and the production's a success. But as more time wears on, it becomes clear to those around him that something's not right with Tony...

A Double Life was written by Ruth Gordon and Garson Kanin, the first of several collaborations between them and Cukor. Here, Gordon and Kanin dabble in the noir genre, exploring the complexities of the human psyche. (Certainly a far cry from Adam's Rib two years later.)

Now Othello plays a major role throughout A Double Life but that's not the only Shakespeare work that gets an allusion. At one point in the film, an element pulled straight from Hamlet is featured. To say what it is would give away other details of A Double Life.

A Double Life is definitely lesser-known Cukor though considering Colman won an Oscar for this (and rightly so), it deserves a look at least. Being released in a year of prominent titles like Black Narcissus and Odd Man Out, it's perhaps understandable that it's somewhat forgotten. Again, it deserves at least a look.