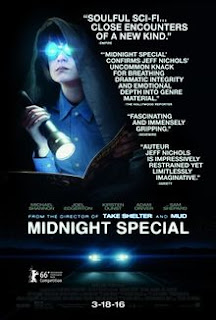 As proven by his previous films, Jeff Nichols has showcased his abilities as a director. With only three prior films to his name, Nichols proved his status as a rising name in Hollywood. (And no, he has no relation to the director of The Graduate.)

So how has Nichols' latest film Midnight Special fared? Indeed it has themes previously featured in his earlier work but they're under a different light here. (And it's clear that Nichols got a bigger budget for this.)

Much like Nichols' previous feature Mud, Midnight Special is set within the backroads of America, itself a character in its own right. And like Take Shelter (another Nichols title), it has Michael Shannon encountering things of an otherworldly nature. Nut again there's more to the film.

In a way, Midnight Special could be viewed as a metaphor for raising an autistic child. You have to protect that child with caution, making sure their surroundings don't harm them in any way. Now you may not see the film in this light but others might.

But overall, Midnight Special is lacking compared to the one-two punch of Take Shelter and Mud. The majority of its heft is in the second third and even then it doesn't feel like much. Hopefully Nichols' next film will be a touch better.

My Rating: ****
Posted by MovieNut14 at 11:44:00 AM
Email ThisBlogThis!Share to TwitterShare to FacebookShare to Pinterest
Labels: 2010s, director: Jeff Nichols, movies, reviews