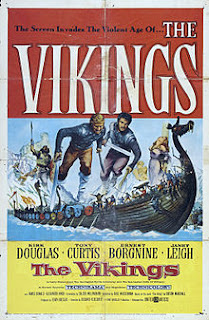 If there's one thing that 1950s Hollywood churned out more than flashy musicals, it's adventure-filled epics. The quality doesn't generally matter for this particular genre. All that matters is that it's entertaining and it has a star-studded cast.

Richard Fleischer's The Vikings certainly fulfills those two details but what else does it provide? Admittedly not much else but hey, it was released the same year as Vertigo and Cat on a Hot Tin Roof. It had to find a way to stand out somehow.

Well, having the likes of Kirk Douglas, Tony Curtis, Ernest Borgnine and Janet Leigh certainly helps. Though it becomes pretty clear that this quartet of performers had their own interpretations of the script. Douglas bellows most of his lines, Curtis and Borgnine saw it as just another paycheck, and Leigh delivers her lines with a little too much conviction. (That's show business for you.)

Though there is one perk of The Vikings: cinematography by Jack Cardiff. As he proved with various Powell-Pressburger productions the previous decade, Cardiff captures some images that are basically indelible from the viewer's mind. (Having the film shot in Norway certainly helped.)

But overall The Vikings isn't anything too remarkable. (It's no Spartacus, that's for sure.) Some of the dialogue is just cheesy beyond belief (and some of the musical cues don't help either). Still, it does provide some amusement through the (admittedly cheaply choreographed) sword fights. (Though if you want to see a Fleischer picture with more merit to it, then see The Boston Strangler.)