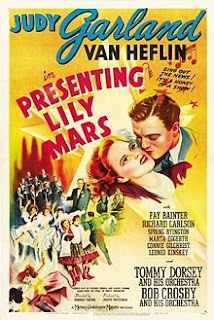 It's established pretty quickly in Norman Taurog's Presenting Lily Mars that the titular leading lady (Judy Garland) so wants to become an actress. Her persistence is so strong, she starts annoying director John Thornway (Van Helfin) to give her a chance. But will she succeed?

Much like A Star is Born the following decade, Presenting Lily Mars has Garland as the promising talent just waiting to be discovered. Of course suspicion of disbelief is in effect for both films since everyone by now knows of Garland's abilities as an entertainer. (C'est la vie, perhaps.)

And of course with this being a Metro-Goldwyn-Mayer Studios production, Presenting Lily Mars relies a bit more on the musical numbers than, well, anything else. (Hey, a little escapism doesn't hurt every now and again.) Though when the film does decide to focus on the plot, it's either hit or miss.

However, there is some good comedy within certain moments of Presenting Lily Mars. Both Helfin and Richard Carlson dish out their fair share of reaction shots. (Marta Eggerth meanwhile has a glare that could cut clean through you.) And Garland gets in on the comedy as well.

All in all though, Presenting Lily Mars isn't anything too remarkable. Yes, the actors have good chemistry but once you read the plotline, you can tell what path it'll be going down. It does provide some entertainment but not much.