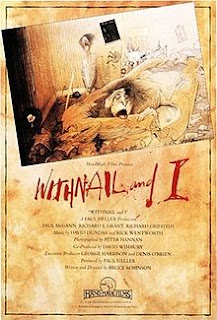 Films with an autobiographical nature to them are frequently appealing. At times, you wonder how much is fiction and how much is fact. It's a small thing, yes, but I enjoy it.

This is the route Bruce Robinson took when he made Withnail and I. The film depicts Robinson's earlier life as a young, struggling actor. (He is depicted as the eponymous "I" as played by a pre-Doctor Who Paul McGann.) I appreciate the way McGann play Robinson's cinematic doppelganger, particularly how he shows the anxiety bubbling within him.

You might be wondering whom Withnail (Richard E. Grant) is based on. He's based on Vivian MacKerrell, a friend and former housemate of Robinson's. And upon reading up on MacKerrell, I can tell that Grant embodied him to a T. It's how he plays Withnail that stands out. He's very ambitious but equally lazy. I love it.

The balance between Grant and McGann's personalities is just fantastic. Seeing Withnail's acerbic attitude and "I"'s nervous persona bounce off each other is just a wonder. It's a small detail like that which will make me like a film more.

And that's just one of many reasons for why I fell in love with Withnail and I. Another reason would be that wonderfully sardonic script by Robinson. If you haven't seen this, you really should.

My Rating: *****
Posted by MovieNut14 at 9:28:00 PM
Email ThisBlogThis!Share to TwitterShare to FacebookShare to Pinterest
Labels: 1980s, movies, reviews