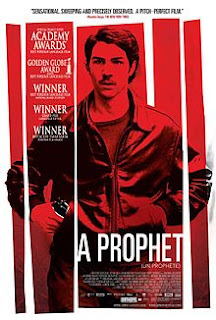 We're seen countless films where the influence of crime on people has already kicked in. What about those where said influence is starting to make an impact? Ah, now that's one story that's not very common.

Jacques Audiard's A Prophet is one such film that focuses on the latter to the fullest. Chronicling the rise of a prison inmate's criminal empire, the film shows how seductive the wrong side of justice can be to some people. (I clearly see now why it's a topic not often highlighted.)

The films stars Tahar Rahim as Malik, a young prisoner forced to work for the leader of a Corsican gang. He's reluctant at first but after a while (and a few beatings), Malik accepts his role in the gang. It takes less time for him to make a name for himself.

Parallels between Malik and Michael Corleone can easily be made. After all, both are men originally unwilling to start a life of crime. Though their backgrounds are different. (We're introduced to Malik as he goes into prison; Michael is introduced as a war hero.) But both men were unable to resist the seduction of criminal behavior.

A Prophet is a really fascinating film. Not many films chronicle the dark side of human behavior and Audiard provides a great portrait. Audiard also became a director I'm keeping an eye on most definitely. Wonder what else he's done...

My Rating: *****
Posted by MovieNut14 at 8:35:00 PM
Email ThisBlogThis!Share to TwitterShare to FacebookShare to Pinterest
Labels: 2000s, movies, reviews