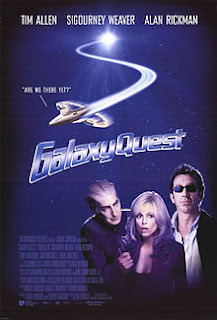 It's really hard to find a comedy nowadays that's, y'know, funny. Most comedies from recent memory rely on sex jokes (and sexist jokes). They really need to focus more on jokes that are actually funny.

Dean Parisot's Galaxy Quest is graciously one such comedy that's actually funny. An affectionate parody/homage to Star Trek, the film is a fun little adventure for anyone. You simply don't find most like Galaxy Quest nowadays.

I think what makes Galaxy Quest so amusing is that the characters know how ridiculous some of the situations are. (One particular moment towards the end springs to mind.) With any other films of this nature, the characters won't bother to question what's happening. With Galaxy Quest, they're insanely genre savvy.

Speaking of the characters, the actors are very good. Tim Allen wonderfully captures the smug nature of his role. Sigourney Weaver is amusing to watch as the blonde bimbo. (And looks pretty damn good for her age then, I might add.) I love how deadpan a majority of Alan Rickman's lines (as well as his perpetual "I'm in hell" expression). Though my favorite performance came from Sam Rockwell, embodying the most paranoid one-episode extra ever.

My Rating: ****
Posted by MovieNut14 at 10:46:00 PM
Email ThisBlogThis!Share to TwitterShare to FacebookShare to Pinterest
Labels: 1990s, movies, reviews