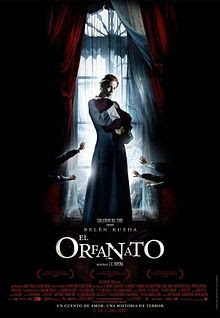 You just don't find that many old school horror films nowadays, do you? We've gotten so used to found footage and B-movies, it's almost as if we don't know how to make a horror film relying only on scares than gore.

Thankfully Juan Antonio Bayona made The Orphanage not that long ago, so there's still some hope. Like any great horror film, The Orphanage is set in a creepy old house. (In this case, the former orphanage Laura (Belen Rueda) grew up in and now currently owns.) And like those found in other such films, this house may have its fair share of secrets.

Unlike some horror films however, The Orphanage has an emotional core. Laura is devoted to her son and it's just heartbreaking to watch when she can't find him not long after the film begins. She keeps her hopes up to find him alive and unharmed, but each passing day makes that hope die a little more.

In a way, The Orphanage isn't strictly a horror film. It could be viewed more as a domestic drama with supernatural elements in it. (Oh, and a dash of paranoia doesn't hurt either.) And as the film wears on, aspects from both genres blend into a sumptuous story. Heartbreaking and lovely all at once.

The Orphanage is an excellent film without a doubt. It has a nice balance of drama and horror that you can't find anywhere else. To put it in simple terms, you must see this film.

My Rating: *****
Posted by MovieNut14 at 11:25:00 PM
Email ThisBlogThis!Share to TwitterShare to FacebookShare to Pinterest
Labels: 2000s, movies, reviews