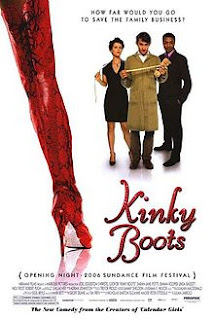 Two early scenes in Julian Jarrold's Kinky Boots perfectly establish the two main characters when they were children. One child shows absolute joy when he puts on a pair of woman's pumps. Another is taught the beauty of the shoe. These two scenes depict who they'll become.

One of them becomes Lola (Chiwetel Ejiofor), a transvestite cabaret singer. She knows that some people look at her in a strange way, but it doesn't soften her brassy attitude. Yet in certain moments, that exactly happens. And Ejiofor wonderfully conveys Lola's fiery personality. (He looks pretty good in drag too.)

The other child grows up to become Charlie (Joel Edgerton), the owner of a failing shoe factory. He's trying to figure out how to keep the family business alive, but he's not sure what to do. Edgerton shows Charlie's uncertainty to a level where you just feel sorry for him.

As with any film, the balance between the main characters' personalities is key. Basically every time Lola and Charlie interact is glorious. (Well, except for one scene.) The way Lola's vibrant thinking and Charlie's conventional thinking clash is a sight to be seen.

Kinky Boots isn't anything game changing or revolutionary but it's certainly entertaining. Ejiofor steals every scene he's in, especially the final few scenes. Personally, I liked it and I'll definitely be seeing it again. (It does strike me as amusing that the director would later go on to make Brideshead Revisited.)

My Rating: ****
Posted by MovieNut14 at 10:31:00 PM
Email ThisBlogThis!Share to TwitterShare to FacebookShare to Pinterest
Labels: 2000s, movies, reviews