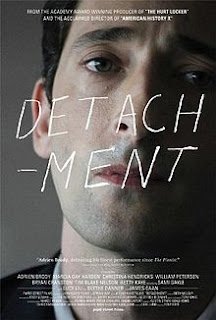 When it comes to the education system, there is a constant debate as to whom is to blame when students aren't grasping the things they're taught. Some blame the teachers for making their lessons too hard. Others blame the parents for not helping their kids. Like I said, it's a constant debate.

The students get basically the same treatment as the teachers here. They're treated sympathetically because they're expected to learn and make a plan for their whilst under constant pressure. But they're also treated harshly because they are the one responsible for their educators' stress. But it's all a matter of opinion.

I must say, the cast for Detachment is pretty phenomenal. The names among the roster include Adrien Brody, Marcia Gay Harden, Christina Hendricks, James Caan, Lucy Liu, Tim Blake Nelson, Blythe Danner and Bryan Cranston. They're all very good (Brody especially), but a special mention to Sami Gayle is deserved.

Detachment isn't an excessively remarkable film but some scenes certainly leave an impact. It doesn't have the same shock value as American History X but it certainly tries to. Also, I love those last few shots of the film. There's a certain poetry to them.

My Rating: ****
Posted by MovieNut14 at 2:36:00 PM
Email ThisBlogThis!Share to TwitterShare to FacebookShare to Pinterest
Labels: 2010s, movies, reviews