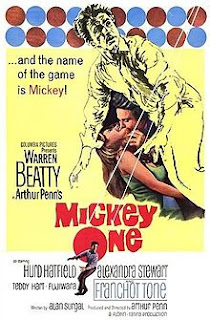 Whenever an actor or a director makes their big break, many of the films they made beforehand usually get overshadowed by said big break. (Let's be real. How many people have seen any of Peter Jackson's pre-The Lord of the Rings films?)

Take for instance both Arthur Penn and Warren Beatty. Penn only had four films to his name whereas Beatty was still trying to make a name for himself as an actor when they made Bonnie and Clyde. As every cinephile knows, that film was responsible for paving the way for the New Hollywood era. But Bonnie and Clyde wasn't the first film Penn and Beatty did together. Go back two years, and you'll come across Mickey One.

Mickey One is a film that was particularly dark for its time. And even though it's a comedy (albeit one with dark humor), the so-called jokes reflect the era. (This was released amid the very tumultuous decade that was the 1960s.) It showed a time of uncertainty and paranoia.

The film also reflects on an existential nature. It shows how Mickey feels trapped by the society he's a part of, a common theme for most films of the decade. He's a loner amid an indifferent world, trying to be recognized. (The result is bittersweet at best.)

Mickey One in toll isn't anything that revolutionary but you can see a few benchmarks later seen in Bonnie and Clyde. Beatty proves here that he can be a viable actor rather than just another pretty face. But all in all if you can get a hold of this film, it's worth a look.