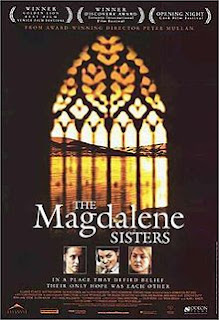 It's made very clear early on in Peter Mullan's The Magdalene Sisters that the three protagonists are going to be punished severely for their "sins". Though the punishment seems a bit overzealous. (Then again, the film is set in 1964 Ireland.) The punishment in question is spending time in an asylum.

But what were their sins? Rose (Dorothy Duff) had a child out of wedlock. Bernadette (Nora-Jane Noone) appeared too flirtatious. And the most insulting of them all, Margaret (Anne-Marie Duff) got punished for getting raped. (Boy, the morals were different then, weren't they?)

It basically comes as no surprise that life in the asylum is a living hell for Rose, Bernadette, Margaret and the other women staying there. Mullan is essentially making a prison film minus the prison. And boy, it's just as unflinching as Midnight Express.

Mullan also succeeds in painting a very bleak portrait. (The real inmates of the Magdalene asylums stated that the film toned down the abuse they endured.) The women endured physical abuse, sexual harassment and psychological torment, all within the asylum walls.

The Magdalene Sisters is an impressive film but I doubt I'll re-watch it any time soon. Not because it wasn't that great of a film but because it's just really hard to watch in some scenes. Still, if you haven't seen it, it's very much worth a look.

My Rating: ****1/2
Posted by MovieNut14 at 9:36:00 PM
Email ThisBlogThis!Share to TwitterShare to FacebookShare to Pinterest
Labels: 2000s, movies, reviews